You've probably noticed in my stock analysis that I like to use cash flow.  This is essentially net income for a company, but I feel cash flow is a much better gauge for measuring a company's financial health.  Net income (or earnings) can be more easily manipulated by accounting measures and does not always reflect the actual amount of money made for a period of time. So earnings does not always equal cash.  As dividend growth investors we care about cash first and foremost as a dividend payment is simply cash going from the company to the shareholder.

Let's do a simple example.  I'm going to open up a beer stand to sell ice cold beer in my neighborhood (screw lemonade, I want to make some real money).  Below is how the beer stand did in its first year and how its net income differs from cash flow.

Now let's see how the breakdown for net income and cash flow differ. 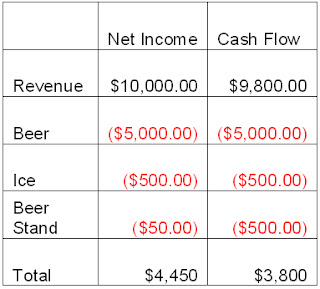 There are two main differences that can be seen from the above.  Net income accounts for the $200 we did did not yet receive as revenue.  It also uses depreciation (10 years in our example) to account for the beer stand expense instead of the actual cost.  Both of these have a significant affect on our final numbers for the year.  Cash flow accounts for the cash we actually received and the cash we actually paid out, so its a much better representation of the beer stand's finances for the year.

As you can see from our example, under GAAP (Generally Accepted Accounting Principles) a company's profitability can be manipulated by how they choose to record transactions. For instance, if a company wants to increase their sales, they can provide retailers with incentives such as extended terms or a promise to take back the inventory if it is not sold. Inventories will then move into the distribution channel and sales will be booked. Earnings will increase, but cash may actually never be received, because the inventory may be returned by the customer.

Cash flow can be further broken down into Operating Cash Flow and Free Cash Flow.  I prefer using free cash flow in my analysis as it represents the cash that a company is able to generate after laying out the money required to maintain or expand its asset base.  I hate to bore you any more so I won't go into further detail on those two.  Perhaps I will do a Boring Terms post on each of those as well if there is interest.

Hopefully everyone can understand the differences now and see why cash flow is more important to us than net income.