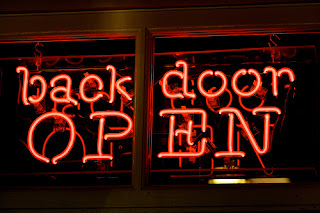 First of all, having "backdoor" in the title of this post may have not been the best idea.  I'm worried about the type of Google search results this post may end up in. Secondly, yes, I'm writing ANOTHER article about Roth IRAs.  What can I say, if you aren't utilizing them you're missing out.  I can't stress that enough. Also, I'm writing this now because you can still fund an account using 2011 money if you're reading this before April 15.

That being said, this isn't an article where I'm going to keep harping on why you should be funding a Roth.  This article is specifically for those poor souls who make too much money to contribute to a Roth.  There is a catch 22 for IRA's, those who have enough money to max out their contribution aren't allowed to do so due to income limits.

But here's the good news.  There is a legal way to contribute to a Roth no matter what you've earned.  There used to be a rule that you could only convert a Traditional IRA to a Roth if your current MAGI was under $100,000.  In 2010 the government removed this income limit so that anyone could convert a Traditional IRA to a Roth. They did this in order to generate more tax revenue on the conversion.  This also opened up the backdoor that high-income earners can use to fund a Roth.  (Please note, as of this writing this option is available for 2011 and 2012.  The conversion income limit could be reinstated for 2013.)

So there you go wealthy people, enjoy.  Feel free to email me if you'd like to send me some cash for showing you this powerful little loophole!
Posted by Dividends Paid at 9:36 PM