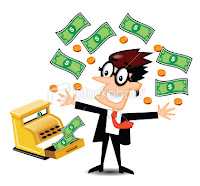 MSFT started paying a dividend in 2003 at which time they paid $0.32 a year in dividends.  When they began paying a dividend you could have bought them for about the same price they sell for today.  Most people would think that's a horrible return, but I think that's pretty darn good considering that is over one of the worst recessions our country has seen.  But the thing we should focus on is not the price over that period, no we care about the fact that MFST has raised its dividend 150% in the past 8 years.


MSFT has $51.37 Billion in cash.  This cash hoard would make most large Countries envious.. actually it probably makes almost all Countries envious (including the USA).  MSFT has matured as a company over the years and would now be classified as a "Cash Cow".  When a company reaches this status, they typically begin to reward their investors with dividends.  MSFT has reached that point, and they are not disappointing.

I'll leave the formal analysis of the stock, as I did with INTC, to a more detailed post in the future.  For now I'm just going to enjoy that 25% larger dividend payout that's getting reinvested for 25% more MSFT stock.

Disclosure I own and am long MSFT.
Posted by Dividends Paid at 4:57 PM